How To Revive An Orchid With Dead Or Dying Roots

There are few things worse for an orchid grower than to discover your delicate plant suddenly appears to have no living, viable roots, and you are helpless as to how to save it.  Shriveled roots on an orchid are a source of stress for every orchid grower because without roots your orchid will dehydrate and, eventually, die.  In previous posts, I discuss a number of measures you can take to avoid reaching the point where your orchid's roots start dying.  In articles about re-potting an orchid and trimming an orchid's dead roots, I discuss the importance of these preventative, prophylactic measures in preventing root rot.  However, unfortunately, bad things do happen to even the most conscientious orchid grower, but there is hope.  In this post, I share how you can possibly stimulate new root growth on your orchid even when it does not appear to have any functioning roots.

**Discover how you can stimulate orchid root growth with black tea here....

**Note: This post contains affiliate links for which a small commission may be earned if you decide to make a purchase through a link.

Lack Of Functioning Roots Leads To A Dehydrated Orchid

Why Are My Orchid's Roots Shriveled & Dying?  Your Orchid Is A Victim Of Root Rot

Orchid's Ideal Environment In The Wild

As epiphytes, orchids do not require soil, and instead obtain all the moisture and nutrients they need through their air roots which remain unencumbered and free.  Growing in the open air in the wild, orchids attach themselves to trees and other objects such as rocks.  Unfortunately, when grown under controlled growing conditions at home which often involves some type of potting mix and pot, poor ventilation is a common occurrence, even for a grower with the best intentions.  Root rot results, killing your orchid's roots and their ability to absorb water, ultimately causing your orchid to become severely dehydrated.  For further in-depth information on orchid care, you can read more here and here.

TIP: Never use standard soil with orchids, and be careful with too much sphagnum moss as part of your potting media, as it has very high moisture retention.

What Are Some Of The Signs Of A Dehydrated Orchid?

Papery, stringy, brown desiccated, dry roots, as well as mushy brownish roots are obvious root rot signs.  Both ultimately lead to dehydration.  If you attempt to water your orchid, you should notice that any healthy roots will usually turn color, mostly a variation of light green, and plump up.

A dehydrated orchid cannot take up sufficient water to sustain itself, resulting in wilted, limp, flaccid and shriveling leaves that begin to curl up on the edges.  Lower leaves especially may begin to fall after they wilt.  Root rot is the leading cause of your orchid essentially becoming rootless.  Without functioning roots, an orchid simply cannot take in the moisture it needs to survive.

For a gorgeous way to display your air plants, including orchids & succulents, consider this vertical garden wall display. Suitable for indoor or outdoor use, these wooden plant holders offer a perfect environment for air-loving orchids while creating a stunning rustic decor.  They are available in many sizes to suit your space.

Stimulate Root Growth On An Orchid: How Can You Rehydrate An Orchid With Shriveled Roots?

No orchid grower ever wants to give up on a struggling orchid.  When is the point of no return?  If you are like most, you won't feel satisfied until you have tried everything.  Let's take a look at some steps you can take to attempt to grow or rejuvenate your orchid's roots, and, hopefully, the entire plant.  First, assess the situation.

First, Prune To See What You've Got

Remove your orchid from it's old potting mix.  You can read more in-depth about repotting a Phalaenopsis here.  Mist your orchid so you can easily see which roots plump up or change color when moist, both of which are signs of healthy roots that should be left alone.  Then take sterilized scissors and cut away any obviously dead roots since dead tissue that is allowed to remain can cause further decay as well as spoil any new media.  Learn more in-depth information about pruning dead roots in this post.

Bottom-line: Removing dead roots from your orchid should not be taken lightly as even ones that may appear dead may just be in need of serious hydration.  The more roots an orchid has, the healthier it is, so leave any firm roots of your orchid alone.

You may also cut off any old flower spikes and dead leaves at this point, as well.  Discard all old potting media and cuttings.

You can also disinfect any cut tissue on your plant with a 3% hydrogen peroxide solution to prevent bacteria from spreading and kill any fungus spores.  Now that you can see what you have left to work with, evaluate what has survived.

Be Thankful For Any Living Roots

If you have any remaining aerial roots, consider yourself, and your orchid, lucky.  Since they are free and unpotted, they have what orchids really like best, which is ventilation.  As such, remaining aerial roots should help save your orchid by taking in necessary hydration and nutrients.  So, if your orchid has at least one healthy root, you can skip the following emergency method below and try hydrating your orchid with traditional methods.  When these methods of hydration don't work, if the root is too compromised, try the emergency measure below.

Stimulate Root Growth On An Orchid: Promote Hydration By Creating A Greenhouse Effect With A Ziploc Or Plastic Bag

Now, you want to keep your dehydrated, rootless orchid alive by boosting water absorption which will also, hopefully, speed up the process of your orchid growing a new root.

When Should You Not Use The Ziploc Or Plastic Bag Method To Stimulate Root Growth On An Orchid?

If your orchid has at least one healthy root, your orchid should respond to traditional water culture.  I also like to use the black tea method to infuse nutrients into my orchid first, as I find this can give a nutrient turbo charge to any struggling orchids which can inspire root growth.  The plastic/Ziploc method is best for orchids that don't respond to traditional hydrating methods, such as orchids with no visibly healthy roots or with sickly, extremely dehydrated roots.

To do this you will want to do your best to recreate your orchid's natural habitat.  In their natural habitat, orchids grow attached to tree bark or rocks, in the open breeze under forest filtered sunlight in an environment that is usually very high in humidity.  In this tropical habitat, there is usually an hour or so of daily rain followed by a drying out period in the open breeze.  Sounds like paradise, right?  Well, it is, especially for most orchids.

One way to recreate these super high humidity rainforest-like conditions that promote new root growth -- without owning a greenhouse -- is by using the Ziploc or plastic bag technique.

An orchid typically loses water through its leaves during a gas exchange with its drier surroundings (kind of like your skin in dry winter air).  However, if you can make the surrounding environment more humid than inside the leaf, you not only stall this water loss to the environment but you also help hydration enter the leaf.  The simulated micro-climate essentially has such high humidity relative to the orchid's leaves, near 100%, that effective water absorption is guaranteed.  Hydrating an orchid this way helps lengthen your orchid's life while affording it time and opportunity to hopefully repair itself by growing a new root.

Steps For The Ziploc Bag / Plastic Bag Method Part 1: Prepare To Stimulate Roots On An Orchid

Part 2: Create A Faux-Greenhouse To Stimulate Root Growth On An Orchid

Part 3: Place Your Orchid In A Warm, Humid But Shaded Spot To Create Its Micro-Climate

Part 4: Monitor Your Orchid Daily To Determine How Long It Needs To Be In These "Greenhouse" Conditions

By one month's time, if the orchid has any chance at growing a new root, it should happen within this time frame.  The idea is to keep the orchid alive long enough to allow the orchid and humidity get to work on root production.

Conclusion:  Try The Ziploc / Plastic Bag Method To Save Your Rootless Orchid

Is this method a guarantee of new roots?  No, it is not; but it is an emergency method to keep your orchid alive long enough to, hopefully, stimulate root production.  It is a chance many orchid lovers are willing to take to give their orchid a second chance at life.  I leave it up to you, my fellow orchid grower, to try this method as a last resort to save your "rootless" orchid.

Have you saved a rootless orchid using this "faux greenhouse" method, aka "plastic bag" or "Ziploc" method or some other method?  If so, please share with other orchid lovers by commenting down below. How To Make A Tropical Wreath 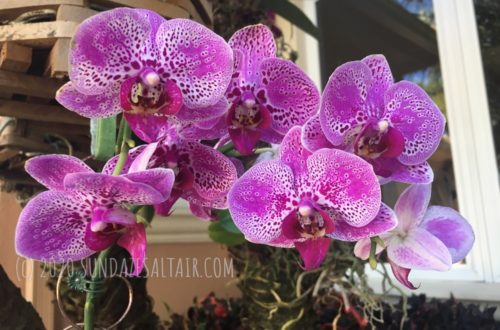 How Much Cold Can A Phalaenopsis Orchid Tolerate? Orchids & Cold Weather